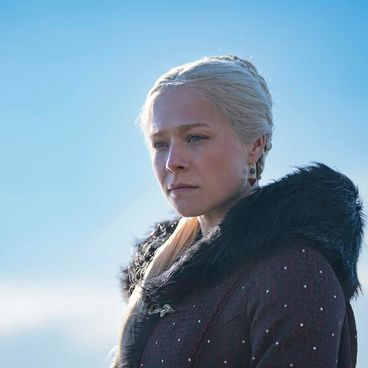 House of the Dragon (HotD)

House of the Dragon is an American fantasy drama television series that is a prequel to the television series Game of Thrones (2011–2019), both based on the A Song of Ice and Fire books by George R. R. Martin. The prequel series is created by Martin and Ryan J. Condal for HBO and is based on portions of Martin's 2018 novel Fire & Blood. Set two hundred years before the events of Game of Thrones, the series chronicles the beginning of the end of House Targaryen, the events leading up to and covering the Targaryen war of succession, known as the "Dance of the Dragons". House of the Dragon received a straight-to-series order in October 2019 with casting beginning in July 2020 and principal photography beginning in April 2021 in the United Kingdom. The series is scheduled to premiere on August 21, 2022. Its first season will consist of ten episodes. The show stars Paddy Considine, Emma D'Arcy, Matt Smith, Olivia Cooke, Steve Toussaint, Eve Best, Fabien Frankel, Sonoya Mizuno and Rhys Ifans.

We are just a few weeks away from the premiere of the highly anticipated HBO series 'House of the Dragon’ and fans have already marked their calendars to witness the epic saga about House Targaryen. Set almost 200 years before the events of ‘Game of Thrones’, the series will follow House Targaryen at its peak and ruling Westeros. After the death of King Viserys’ wife, he announces that Princess Rhaenyra Targaryen will be leading the house once he is gone.
Things start to go downhill as soon as Viserys dies and some people from the kingdom don’t let Rhaenyra take the throne. A civil war takes place and that marks the beginning of the end for the legendary kingdom.
If you want to know all the details about the upcoming HBO series, then search no more, we have every detail for at MEAWW.

When will ‘House of the Dragon’ release?

‘Game of Thrones’ prequel ‘House of the Dragon’ will be premiering exclusively on Sunday, August 21, on HBO and HBO Max.

Where can I watch ‘House of the Dragon’?

The HBO series ‘House of the Dragon’ will be airing on HBO and takes the primetime slot of 9 pm EST. Apart from that, the series will also be available for streaming on HBO’s streaming platform HBO Max. Customers who have an HBO Now subscription can upgrade to HBO Max free of charge. The trial period for HBO Max is valid for 30 days.

Is ‘House of the Dragon’ a prequel to ‘Game of Thrones’?

Yes, the upcoming series serves as precursor to the events that take place in the series and is set almost 200 years before the events of ‘Game of Thrones’.

How many episodes are there in ‘House of the Dragon’?

HBO and the makers have announced that the first season of ‘House of the Dragon’ would consist of 10 episodes. The first episode will be airing on Sunday, August 21, with the series finale premiering exclusively on October 21.

What time does ‘House of the Dragon’ drop on Amazon?

The first two episodes are slated to drop at 6 pm PDT/9 pm EDT in the United States on August 21. For those in the UK, the first episode drops at 2 am PST on September 2.

What is ‘House of the Dragon’ all about?

The upcoming series will primary focus on House Targaryen and the way they ruled the Westeros. The show will also give us a glimpse about what happened during their rule and how everything changed once Rhaenyra got betrayed. As soon as Rhaenyra gets to know that she has been cheated, chaos ensues and a civil war takes place between two sections of the Targaryen family.
It will see the meteoric rise and horrifying downfall of House Targaryen, leaving them in ruins.

Who is the showrunner of ‘House of the Dragon’?

Based on the ‘A Song of Fire & Ice’ novel by George RR Martin, ‘House of the Dragon’ is created by Ryan J. Condal whereas Martin serves as the creator and an executive producer on the show.

Who stars in ‘House of the Dragon’?

What is the official synopsis of ‘House of the Dragon’?

The official synopsis reads, “Based on George R.R. Martin’s ‘Fire & Blood’, the show is set 200 years before the events of Game of Thrones and will center on the conflict between the heirs of King Viserys Targaryen, a civil war that later became known as the Dance of the Dragons.“

Is there a Season 2 of ‘House of the Dragon’?

According to reports, the Season 2 of the prequel series is already in development and might start production in late-2022.

Prince Daemon Targaryen was a member of House Targaryen, being a younger son of Prince Baelon Targaryen and a brother of King Viserys I Targaryen. Daemon was the second husband of Rhaenyra Targaryen, Princess of Dragonstone, following Ser Laenor Velaryon. Daemon was said to be the most experienced warrior of his time and wielded the Valyrian steel blade Dark Sister. A dragon rider whose dragon was Caraxes, Daemon declared himself the King of the Stepstones and the Narrow Sea. During the Dance of the Dragons, he was a prominent supporter of his wife, Rhaenyra. According to the books, ‘Fire & Blood’ and ‘The World of Ice & Fire’, Daemon had silver hair and wore plate armor. Matt Smith will be seen playing the role of Daemon Targaryen in the most awaited HBO series 'Game Of Thrones: House Of The Dragon'.

Also known as ‘The Hand of the King,’ Ser Otto Hightower (Rhys Ifans) loyally and faithfully serves both his king and his realm. 'Ser Otto is the father of Lady Alicent Hightower, who went on to marry King Viserys I Targaryen after the death of his first wife. The marriage between the two made Otto and Viserys' relationship even stronger'. Otto who was initially on King’s side, turns into a traitor and changes his lane. He dismisses late king Viserys decision of Rhaenyra’s succession as the next queen of Westeros. Instead of that, the entire traditionalist faction ends up making crown prince Aegon II Targaryen (Tom Glynn-Carney) as the next king Aegon II. This in return sparks off the nastiest civil war inside the House Targaryen known as ‘Dance of the Dragons.’

Rhaenyra Targaryen is the most important character in the ‘House of the Dragon’ universe and everythingrevolves around her. Born in 97 AC, Rhaenyra is the only living child of King Viserys I and Lady Aemma of House Arryn. She is a Dragon rider and took her a “dragon-rider” at the age of seven and named the young dragon Syrax. The young princess became King’s cupbearer at the age of 8 and was named the heir to the throne when Viserys’ wife and Rhaenyra’s mother died.Things changed for her when Viserys married Lady Alicent Hightower and gave birth to 3 children. When Viserys died, Rhaenyra was at the Dragonstone and was not told about her father’s death so that she doesn’t come back to claim the throne. As a result, Alicent and others crowned Aegon the new leader. Rhaenyra got angry and did her own coronation. When she was given Dragonstone to rule, she refused to do so and began preparing for the war. She is married to her uncle Daemon Targaryen, with who she shares 5 children: Aegon III, Jacaerys Velaryon, Joffrey Velaryon, Viserys II Velaryon, and Lucerys Velaryon.

Viserys I Targaryen was the fifth Targaryen king to take the Iron Throne. He ruled from 103 AC to 129 AC and succeeded his grandfather, the Old King Jaehaerys I. He was skilled and an able rule during whose reign prosperous peace and legacy of his grandsire continued.
However, it was during his time that the civil war known as the ‘Dance of the Dragons’ that would much later devastate the realm during his reign. Viserys was a dragonrider who rode Balerion until the dragon succumbed to old age during the time of Jaehaerys I. It was revealed that he never took another dragon after the death of Balerion.

Born in 88 AC, Alicent Hightower is the daughter of Otto Hightower and a member of the House Hightower. Interestingly, there is no information available on her mother and wasn’t seen at the court, which means she died much earlier. Alicent is a graceful lady and people often considered her to be precocious. She became really attached with the Targaryen family because of King Jaehaerys I Targaryen. When Jaehaerys died, Viserys was named the King of Westeros and Alicent caught his eyes. Although a lot of suggestions were given to the King, he went out of the way and chose Alicent as his next partner. They got married in 106 AC and as soon as they became man and wife, rumors started floating around that Alicent had slept with King Viserys even when Queen Aemma was still alive. She had a great relationship with Rhaenyra initially, but the birth of three children made it impossible for her have a good relationship with her.