The mother was not sure of his past, but later it was discovered that he is a registered sex offender who was still on parole while stalking her

NEW YORK CITY, NEW YORK : A woman's video of a man following her and her daughter at a store has gone viral. The man, who was also filming them, was later identified as a registered sex offender. The woman, whose identity is not known but uses @dd_escapades as her username on TikTok, reportedly found the pervert at a Walmart store. Initially, she was not sure of his past, but later it was discovered that he is a registered sex offender who was reportedly still on parole while stalking her.

The TikToker in her now-viral clip said, “I don’t know him, and he’s following me and recording me,” while directing her camera towards him. She also noted, “Now he’s gone after he realized I started recording him.” After taking the shots of the man, the woman went on to show it to a staff member of the supermarket, who found the man’s action “really weird” and “creepy”.

Darren Lamar Thornton: Virginia school district kept sex offender counselor for a year AFTER being notified of his arrest

@dd_escapades said, “I don't know if he's just some weirdo. I don't know if he's on drugs or drunk, or if he's part of some trafficking thing, but always be aware of your surroundings and record and report.” Later, the mother shared another video in which she claimed that the man “has been identified” after her first video went out in public.

The woman asserted, “He is a registered sex offender, class 1. He was arrested for molestation and rape. We know where he lives. We know his phone number. We know his name.” She also said that she handed over her recording as well as Walmart’s CCTV footage to the person’s parole officer as evidence because she was going to file a formal complaint against him. The offender’s “parole ended at midnight on August 8, the day before she recorded her video. If he was still on parole, he would have been arrested immediately,” The Daily Mail reported citing the mother.

The TikTok user has reportedly given her consent on a form to press charges against the man, alleging him of stalking, videotaping, and taking pictures. She told the publication, “Now it's going to go to a judge, and he's going to be summoned to court. I'm hoping this creep doesn't show up to court. That is an automatic warrant for his arrest.”

“The officer [on the case] spoke with the [man's former] parole officer, and she told him, if it made me feel any better, it wasn't my daughter that he was interested in. It was me. [It] doesn't make me feel any better. It's disgusting and disturbing either way,” @dd_escapades concluded.

The mother’s videos have attracted a huge number of comments with a user apparently commenting, “This happened to me years ago. I had an employee walk me out. By the time I got to my car, the guy was parked behind me in a van!!!! It really happens.” The second one said, “I had this happen to me and my daughter yesterday. The worker said that he couldn’t kick him out. Stay safe.” The third user noted, “You handled the situation well. Always trust your gut.”

ADVERTISEMENT
Share this article: NY mom exposes registered sex offender following her and her daughter at Walmart in viral video 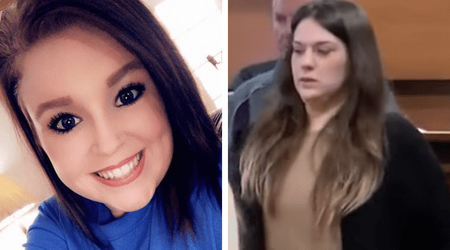